I was thinking quite a bit about “men’s toys” this week. It has ever hurt my heart that there are, comparatively, so few high-end toys designed for penises. Even then, there are only so many ways you can make a wheel, so you tend to see the same concept over and over again. Take a soft material that will wrap around a penis and, when thrusting, will mimic coitus. What works works, after all. It is also true that much can be done with materials, design, and style so there is a variety to be had and some are truly magnificent. Today, however, I want to point out a company that looked at the way it has always been done and said, “Naw. Let’s try something else.” 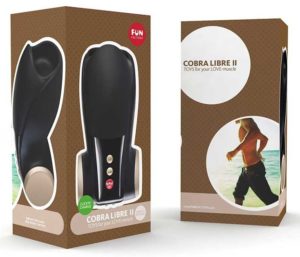 Fun Factory, Cobra Libre doesn’t look like a sex toy.  (Personally, I think it looks like a vehicle from Tron.)  If told that it is, in fact, a vibrator most would assume it’s intended to stimulate a vulva. While it can (more on that later) it is, very specifically, designed for a penis. It works on the same principal as a massage wand or a portable shower head works for a vulva. Focus deep tissue stimulation on one spot that is especially sensitive and let nature happen.  The cup is shallow, meant to push against the glans, rather than encompass the shaft. Just turn on, slip in, and hold on until the world is finished coming apart. Yes, it is that simple.  Since it works without any motion, Cobra is a go to for both the indolent and those into restraint, in addition to anyone looking for something outside the typical experience.

When it comes to construction, Fun Factory is always on top. Crafted of medical grade silicone and ABS plastic, the Cobra is waterproof, rechargeable, and operates under a two year warranty. It also has two super rumbly motors to not only double your strength, but to allow for throbbing harmonization as well as classic vibration.  It really is designed and determined to do all the work for you.