Several months ago, I was asked to review Zumio by one of my product vendors.  I was extremely flattered that they 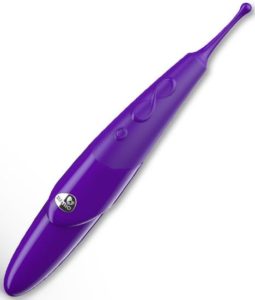 wanted my opinion (it wasn’t their own toy, but one they were looking into carrying) and I promised to do so without hesitation.  My sales rep handed me me the box at a meeting, but I didn’t get to dig into it until after she had taken her leave.  Once I did get the box open, I wasn’t sure what to think. Full disclosure here, the packaging is kind of cliche and device itself looks sort of awkward.  After scanning through the packaging materials and learning the (very simple) controls, I turned it on to see what was what.  There I was, this strange device humming away in my hand, thinking that it looks like nothing so much as a purple electric toothbrush.   I sat there for a while just looking at it.  Zumio came home with me that day.  I wasn’t precisely looking forward to trying it, but I knew I had to.  It could not wait.  I had to know.

Zumio is strong.  It doesn’t vibrate, it oscillates, swirling in tiny even circles.  Rather, it feels like a circular path, all you can see is a blur.  My prototype has three speeds, Super Strong, What is Happening, and Why do I See Light.  By the time it was released to the public, however, it had been reworked to have eight speeds.  The final version has a much wider spread between intro and top speed, though the steps between are very gradual.  This thing isn’t meant for my hands through, so I dove in the deep end and tested its intended function.  A week after I brought that device home,  I was still not certain how I felt about it.  I did know that it leads to orgasm and it goes there quickly.  I appreciated the function, but I really wasn’t certain that I liked it.  It is rather harsh in its effectiveness, even for a seasoned aficionado like myself.  Still, it had been a week, and I hadn’t reached for any other toy in that time.  Not because I didn’t have them close to hand, I was choosing Zumio.   It lights proverbial fires every time I press that “on” button.  Even now, after I am comfortable admitting that I adore the thing, I am a little surprised at how brutally efficient it is. 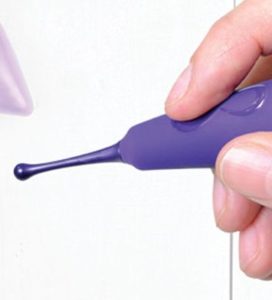 Zumio is not for everyone.  Some people want a vibrator that is going to cover a lot of surface at once.  That person wants a wide head with a thumping deep vibe.  For that person, I would point out a Vibratex, Magic Wand or a Shibari brand wand.  Some people want sharp stimulation that is precise.  In the past I have directed those people to the Nu Sensuelle, Point or the We-Vibe, Tango.  The pin-point-power-queen has a new option that can crack open the universe while angels sing.  Even now, words seem so inadequate.  This thing is it’s own special kind of strong. Strong and directed exactly where you want to to be.  (I do recommend that you lay the length of the stylus along the length of the clitoral shaft to start.  It can be quite jarring to use the ball end of the stylus right out of the gate.  They don’t have that in the packaging instructions, but it worked best for me.)

What about basic stats, though?  Zumio is rechargeable (complete with a handy little charging stand), splash-proof, and operates on a 1 year warranty.  A full charge lasts from 75 minutes to 4 hours depending on how hard you press with the stylus.  I can’t imagine using it for one full hour straight let alone four, but you could if you needed to.  Quick.  Efficient.  Ruthless.  That’s my beloved Zumio.