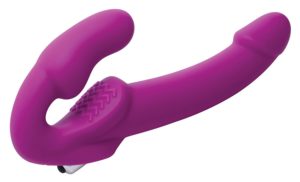 There is a story I like to tell about high-school me. How I used to doodle the Perfect Strap-On(tm) in the margins of my notes and drafts. Something that would hold in place without a harness but doesn’t require I have Kegels that can squeeze water from a stone. Something modestly sized so that straight boys don’t run from me, but not so little that girls look at me with regret. There were many versions of this strap-on over the years, but it always had the same basic shape. That shape is very similar to the Strap U Evoke and Revolver. 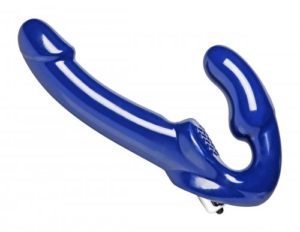 What makes this shape stand out? The sharp angle where the internal arm meets the external, for one. While both Evoke and Revolver will flex, the more actute the angle starts, the sturdier the anchor, in most cases. The swell on the inside arm, presumably for G-spot stimulation, is also going to hug against the inside of the pubic bone for even more security. The vibrating bullet is also removable. This makes for simple cleaning, quick replacement (as the motor will die long before the actual dildo does), or accommodate an easy upgrade to a better motor (picture a Tango in that hollow).  Best of all, you have a subtly sculpted texture right where the dong is is going to rest against the Driver and that is literally on top of the bullet chamber. These traits are all true for both versions.

What’s the difference, between the two then? Evoke is silicone, making it firmer and better at translating vibration. Revolver is TPR, making it more flexible and bringing down the price point.  That final choice is up to you.