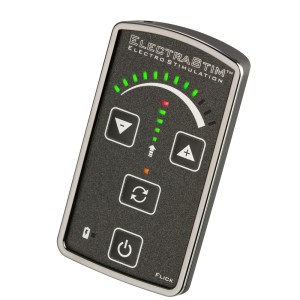 Our subject this week is e-stim in general, rather than any one product specifically. I adore e-stim, but I knew very little about the history of the practice.   The term one most often hears paired with electric stimulation is TENS or transcutaneous electrical nerve stimulation (low voltage/low frequency). In basic terms, TENS uses electricity, applied directly through the skin, to stimulating surrounding nerve endings (specifically, those nerves on the path between two poles of contact).  All of our products, with the exception of the Neon Wand, are TENS. It’s also the most common for at-home medical treatment.  If you have an e-stim unit at home for your back pain, it’s is a TENS unit. The Neon Wand that we offer is a “violet wand” (high voltage/high frequency) and really is its own thing with its own rules.  Think about the shallow jolt you get from a static-electric shock.  That a rough summary.   Since TENS has a variety of medical uses there is that much more material about them, both research and anecdotal. Because of this, that is where my focus is going to be today.

The general consensus of the history of e-stim tells a story about a product released in the 1950s named, “Relax-A-Cizor” as the first popular recreational device. While it was marketed as a passive exercise product (stimulate your muscles while you read a book!) that is NOT the use it became known for. There were a wide variety of other electric “health devices” over the years since that found themselves appropriated into the bedroom. It was in 1986, however, that a product was born that proudly, and deliberately, declared itself a sexual pleasure device. That company was Paradise Electro Stimulations, also known as PES.

As we’ve already established, e-stim was birthed in the medical field. The uses to which electricity has been put have been myriad. Just to skim the top it has been used to treat erectile distunction (up to and including individuals with paralysis), anorgasmia, physical therapy for stroke victims, cryonic pain, and infertility, among many, many others. As the science is relatively new, there is still a great deal of debate regarding efficacy. Those studies are ongoing even today. When it comes to sensual pleasure, however, those who enjoy e-stim have already made up their minds.

Now, I would like to tackle that first misconception that nearly everyone has in the beginning. “Doesn’t being shocked hurt?” Short answer, no. Not unless you specifically want it to.  You can get anything from a mild vibration or prickly warmth to the involuntary jump of muscle, but you have to crank it up to get pain.  In my personal experience, the sensation of muscular contraction drowns out the prickle of electricity under a great many conditions. Just start low every session, then adjust to taste. If you follow that simple rule, e-stim will never cause pain.

Please, abstain from e-stim if you have a pacemaker, other electronic medical implant, a heart abnormality, or are pregnant.

Plot your path! When using a TENS style device, electricity will travel from pole to pole. This is true if you are using a bipolar attachment or two devices to create a circuit. Think about what the current will cross to get from one point to the next. When you are using two single pole attachments to create your circuit, never position pads or toys in such a way that electricity crosses the heart, brain, or throat.

You’ll also want to avoid metal piercing jewelry as they can heat under electrical current (that is literally how heating elements work in a stove top or space heater).  I’ve not encountered an issue with this to date, but I am also very careful to avoid it.

Always insert a toy designed for penetration before turning the current on and don’t withdraw until after it is switched off. The feel of an electric pulse is very different from point to point and what feels great inside the body is often be a jarringly different sensation to the delicate skin of labia or anus.

Keep your sessions short. 15 minutes to a half hour is a good guide for how long your should stimulate any specific part. Move from one to a new spot and keep zapping if you like, but don’t overdo it one location. It won’t damage you, but it could leave you sore.

Don’t use silicone lubricants. That’s not about safety, but practicality. The silicone used in lubricants is a natural insulator and that defeats the point of e-stim.

In parting, I believe I deserve a treat for not making a single joke about e-stim and the notoriously promiscuous Zeus.  That was very difficult to resist.