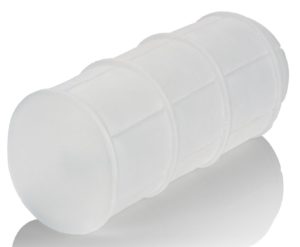 This week, I want to talk about two toys. At a glance, they have very little in common. If you get them out of the package, though, the similarities come to the fore. More important, those things in common are points that I’ve been told there was a very loud demand for. Sadly, neither seems to have come to the attention of the people that had been asking for them. Our subjects for this week are the Dual Stroker and Torpedo Stroker, both from Cal Exotic.

Lets’ start with the things they have in common. Both are extremely simple hand-held masturbation sleeves that have a non-specific orifice. No mouths, vulvae, or butts in sight, just a simple neutral opening. That makes them a little less conspicuous in a drawer, good for a user of any sexuality, and depending on the individuals involved, can be less awkward in partnered play. Both sleeves are soft, light, and flexible as well (TPR for the Dual, TPE for the Torpedo). This means they are easy to handle, easy to hold, and would squish nicely between bodies, if needed. They are both open ended for simple cleanup, as well.

While very similar, they do have a few differences to cater to a different user. The Dual Stroker, from the Apollo line, is not only deeply textured, it’s reversible. You may choose between long, sinuous ridges or an army of blunt nubs just by flipping the sleeve inside out. The Torpedo, from the Colt line, has a much more subtle texture for the less is more crowd. It is also translucent to offer a show when in use (that last is always a deal-maker for me).

If you were among those that called for more neutral-orifice masturbators, you were heard and your time is now!