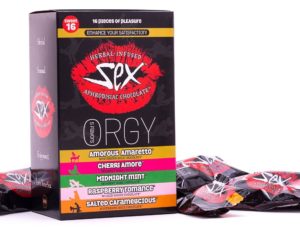 Sex Chocolates from SexTZ; delicious treats with an ulterior motive.  These are worth indulging for flavor alone, but they have the bonus of a careful mix of homeopathic herbs in addition to the tasty milk chocolate. I am not one to take things for granted, so I dug in to track down the medicinal qualities of that proprietary blend. Some are scientifically proven, others are anecdotal, so your mileage may vary. (For anecdotal evidence, I only reported the properties that have sizable volumes of documented testimonial behind them.)

Siberian Ginseng: This root is often used to regulate blood pressure abnormalities (both high and low). It also has a well known reputation for imparting energy and boosting the immune system.

Guarana: Caffeine! Gets the heart pumping and keeps the mind alert.

Damiana: This one has a long and storied history as an aphrodisiac. There has been little medical testing done on the specifics, but it does contain compounds chemically similar in composition and effect as progesterone.

Muira Puama: This was my favorite to learn about. More than just an aphrodisiac, this one has long been used as an antidepressant.  (Little wounds a sex drive like clinical depression.) This plant’s history of efficacy for sex play  is largely anecdotal, but it is very, very plentiful. Medical studies have, indeed, shown a reliable and notable increase in sexual response (in both mice and humans).  Here is where it gets fun, no one can isolate how. There is no chemical or compound that can be credited with the effect, it just happens.

Avena Sativa/Common Oat: This was another fun one to research. It’s the stem of the plant that offers up medical properties. It has been proven to increased testosterone production and free up bound testosterone that is already in the body. (Regardless of gender, testosterone plays a part in arousal and sexual response.) Avena Sativa also works as a circulatory aid. This doubles down on the blood and erectile tissue/nerve sensation effect of the horny goat weed. I also discovered that many believe the use of oat stems for sexual vigor is the origin of the saying, “sowing one’s wild oats.”

Passion Flower: This has proven useful for treating both sleep problems and anxiety. Even if you don’t endure clinical anxiety, the bedroom is a common place for nerves and that helps no one. The largest portion of resent studies involve using this herb to ease the discomforts of opiate withdrawal.

Dong Quai: This one comes with anti-inflammatory properties. Anecdotal evidence suggests it improves vigor, especially in women. It’s also used to treat some of the side effects of menopause by mimicking estrogen. Just like testosterone, everybody makes estrogen, and it’s also an important part of maintaining a healthy sex drive.