Nexus Jr, from Vixen, is a masterful device. Mind-blown. Full stop. Game over. I have used one strapless that stayed in place easier, but only one. None, however, come near Nexus when it comes to quality of materials and feedback in use.

Unlike the VixSkin items that make up the bulk of our Vixen assortment, Nexus is in their classic silicone of uniform density. Somehow, Vixen has crafted the exact density needed to allow the driver of this rig to very nearly feel through Nexus. The subtle pull and push of a thrust or slide of lubricant against skin, shivers up the shaft and can be felt in the driver-side arm.  With repeated use, each sensation can be interpreted as though it was a physical extension of the body. This can greatly reduce accidental pinching, awkward angles, and running out of lube. On a personal note, Nexus Jr is the closest I have ever found to a true extension of my body. Perhaps that’s a bit of an overshare, but it is important and relevant information. I can’t guarantee it will work the same way for everyone, but I am certain it is more the rule than an exception. 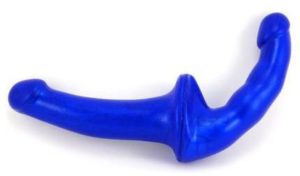 Then there is the shape. The driver’s side is short enough to fit comfortably, thick enough to grip without Kegels of Iron, and has just enough curve to help keep it secure. The passenger’s side had enough length for a fluid thrust and not so girthy to turn off people that are unused to penetration. Last, there is the actual join. Nexus is comprised of two distinct dongs that have been firmly wed at the base. At the point of that merge, there is a clitoral bump built in on both sides.  What is more, Nexus Jr doesn’t require a partner.  Even without an extra pair of hands, it is a beautifully built device with two distinct sensations to offer, a long smooth slide or a ribbed G-spotter.  The end that is not in use offers a very convenient handle.  All in all, Nexus Jr is a paragon among double dongs and I have full confidence in saying so.